As a medical doctor, he has studied the physiology of different body systems and their integration with the mind. He recognizes the interaction of physical issues such as athletic injuries with mental health. He is also trained to diagnose and treat mental health issues such as anxiety disorders, depression, ADHD, substance use disorders. As a child and adolescent psychiatrist, he is well versed about brain development and its impact on emotional and psychological functioning. He currently serves on the faculty of Johns Hopkins Hospital Department of Child and Adolescent Psychiatry teaching and supervising residents as they prepare for their transition to clinical practice. 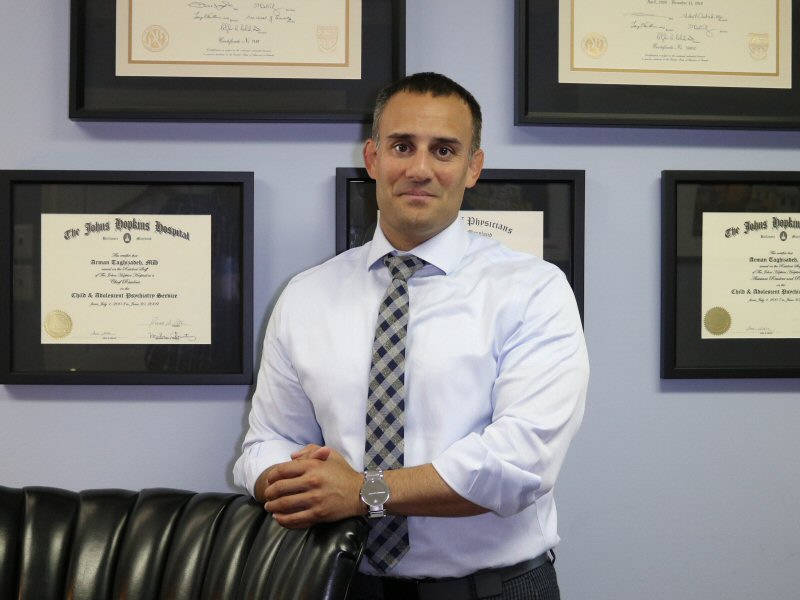 As a mental health provider, Dr.T appreciates the relationship between thoughts and emotions and in turn, how they impact actions. He analyzes each component and specializes in treating anxiety and related disorders that are commonly associated with limiting athletic development and achievement in other aspects of life.

As a wrestler, he earned All-American honors in high school and was selected to compete as part of the Maryland Junior National Team. He continued his career at the NCAA Division 1 level for all 4 years of college. Furthermore, he has worked as a youth and high school wrestling coach. Dr. T has personally experienced the importance of mindset and mental toughness in developing the work ethic needed to handle setbacks and achieve a high level of achievement.

He continues to train as a competitive athlete in variety of sports including weightlifting, running, cycling, boxing, Cross Fit and Go Ruck challenges.

Given his medical and psychiatric education, combined with his athletic and personal experiences, Dr. T has the unique ability and skill set to connect with and train elite athletes to ensure they have the mindset and tools necessary for success. He also provides education to parents, coaches and sports medicine professionals to better understand and support athletes to consistently perform at the highest level.

He received his M.D. from the University of Maryland School of Medicine in 2004 where he was selected to be in the Combined Accelerated Program in Psychiatry (CAPP). He completed his General Adult Psychiatry Residency and his Child and Adolescent Psychiatry fellowship at Johns Hopkins Hospital and served as Chief Resident from 2008-2009.

Dr. T maintains an independent practice in the Baltimore area and works as a faculty instructor at Johns Hopkins Hospital in the Division of Child and Adolescent Psychiatry where he teaches seminars and supervises residents. He is a member of the Health Committee at Gilman School where he works with administrators and other physicians to optimize the physical and mental health of students.

He has served on the Board of Associates for KidsPeace; a charitable organization dedicated to serving the behavioral and mental health needs of children, families, and communities. Dr. T is currently a member on the board of the “Catch a Lift” Fund, a Non Profit organization aimed to serve wounded military veterans through physical fitness and mental wellness. In addition, he works with the “Positive Strides” and “Sidelined” programs to support competitive athletes dealing with the emotional impact of significant injuries.

Dr. T is an active member of both the American Psychiatric Association and the American Academy of Child and Adolescent Psychiatry where he has served on several professional committees.

In 2015, he was recognized by the Baltimore Business Journal and the Living Classrooms Foundation as a, “Rising Star.” The International Association of Healthcare Professionals in 2016 recognized him as a “Top Doctor.” Baltimore Magazine has consistently selected him as “Top Doctor” in 2016, 2017, 2018 and 2019.